Hello there, I’m Windermere Real Estate’s chief economist, Matthew Gardner, and welcome to the latest episode of Mondays with Matthew. This month we’re going to take a look at Blockchain technology and cryptocurrencies themselves and how both may impact home buyers and sellers in the future.

But before we dive into the potential impacts of cryptocurrency on the residential housing market, I must preface this by saying that the very word “crypto” is one that certainly divides people. Some see it as revolutionary, a tangible asset that will take over one day as the de-facto global currency, while others believe it to be unsustainable and ultimately valueless. And there are even some who firmly believe that it’s nothing more than a Ponzi scheme.

Now, everyone is certainly entitled to their opinion, and I will refrain from offering my own view on the currencies themselves, but, although still in its infancy, it continues to evolve and is garnering significant interest from individuals and large corporations alike.

Why are corporations interested, you ask? Well, a recent report from Crypto.com1 put the number of people around the globe who own some form of cryptocurrency at more than 295 million and they are forecasting this number to explode this year and hit the 1 billion mark! And the value of all these currencies today? As of March 14, the combined value of all cryptocurrencies was 1.74 trillion dollars2 with the largest, Bitcoin, valued at almost 740 billion dollars. So, it should not be a surprise to see many mainstream companies across multiple industry sectors start to introduce ways to accept crypto as payment for goods and services.

Companies moving into this space include AMC movie Theaters3 who recently announced their plan to accept coins by the end of this year. Fintech companies like Paypal and Square are also betting on crypto by allowing users to buy currency on their platforms. And, unsurprising to most, Tesla is also interested, but have yet to confirm whether they will accept coins as payment for their vehicles or not.

With cryptocurrencies now gaining traction in mainstream businesses, the housing sector has started to take an interest too with the emergence of companies like Propy, whose goal is to totally automate the home sales process by introducing Blockchain based technology to allow transactions to occur entirely online using smart contracts. Other companies are figuring out how to use blockchain technology to grow the “fractional-ownership” segment of the housing market.

But when it comes to simply buying a house—well that is an entirely different situation. Of course, a home buyer could easily cash out the Crypto they have and use those funds for a down payment, or even to buy a house outright. But we don’t see more of this today as they understand selling their currency is a taxable event and, more than likely, taxes owed will hit their balance sheets pretty hard. And knowing that this is a real issue in the market, it should come as no surprise that a company has come up with a plan to overcome what is seen as one of the biggest obstacles to using digital currency for home buying.

And they are Milo, who claim to offer the world’s first “crypto-mortgage”. Essentially, they will allow borrowers to use Bitcoin—but only Bitcoin as of right now—as collateral for a 30-year mortgage.

How this works is pretty simple. All buyers have to do is to “pledge” their coins on a one-for-one basis. Simply put, someone looking for a $500,000 mortgage would have to put up $500,000 worth of Bitcoin. This way, they don’t actually have to sell their coins, so there are no tax implications. And instead of going through a FICO credit check and showing proof of income to evaluate a borrower’s creditworthiness, Milo evaluates them based on their crypto wealth as well as the value of the property they are hoping to buy.

And in exchange for locking up their crypto, borrowers get a 30-year mortgage for their home purchase can also make their mortgage payments via traditional currency or Bitcoin. But there are differences between this and a traditional mortgage. First off is the interest rate. It currently ranges anywhere from 5 to 8% depending on the loan-to-value ratio. This is higher than the rate they could get today.

And finally, when the buyer sells, on closing Milo is paid back in U.S. dollars, and then the seller gets the Bitcoins they used for collateral back, along with the profit made on the sale.

I think that this is certainly an interesting play in the ownership housing sector and, although still in its infancy, looks to meet the needs of crypto owners who don’t want to face the tax obligation that would occur if they were to sell their coins to buy a home. Now, I must make clear that Windermere is certainly not endorsing Milo. In fact, I personally have concerns about the program given how volatile cryptocurrencies are.

You see, it is possible that users may be caught out by the value of their Bitcoin dropping significantly and, if this occurs at or around their anniversary date, it could significantly raise the interest rate—and therefore the monthly payment—on that loan, and if the price drops too far, then they may have to go through what is, in essence, a margin call, where they will have to submit more funds to the lender to bring them back to a point where equity in the home combined with the value of the Bitcoin covers the loan itself.

And I would add that if for some reason the buyer has to sell the home within the first three years4 of purchase there are pre-payment penalties that will be incurred. All in all, it is an interesting model, but it is still in its infancy. As always, time will tell how well it gets adopted.

The bottom line for me is that the likelihood of Cryptocurrency revolutionizing the way we buy homes from a finance perspective is still several years away, but after that, who knows! Something that does have the capacity to be adopted into the mainstream far quicker is the blockchain technology itself. I personally see title insurance as a segment that could benefit significantly and may well adopt this tech sooner than others.

With title insurance companies responsible for verifying and ensuring that a buyer or lender (depending on the type of title insurance) gets either clean ownership or a lien position in the land in question, Blockchain could change many aspects of how these processes are carried out. Here are some of the benefits:

The Potential Benefits of Blockchain Technology in Real Estate

Security. More than 25 percent of title reports (alta.org) detail some form of defect to the title itself, but the ability of blockchain to immediately detect erroneous or potentially fraudulent information can significantly help to support the reliability of the records, therefore making the job of title insurance companies much more straightforward. 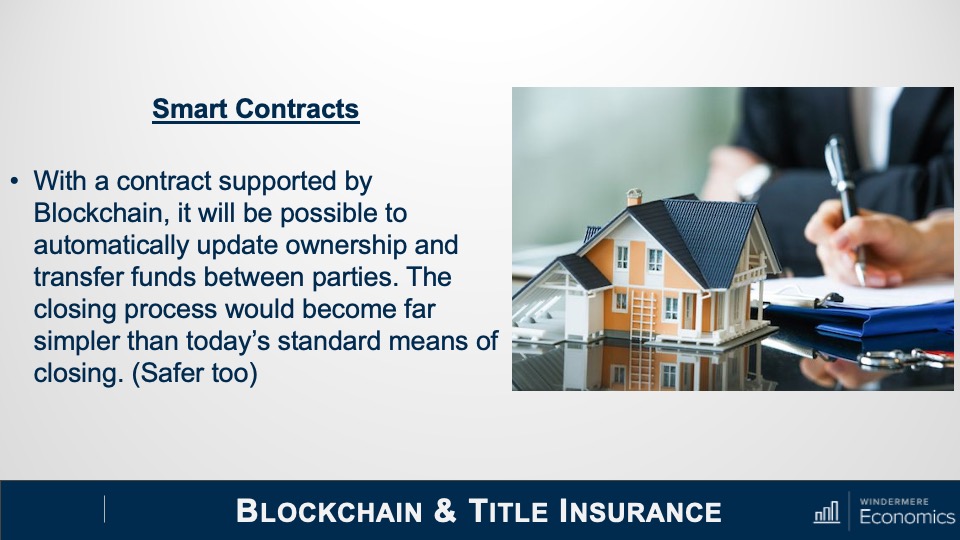 And then there’s smart contracts, which are actually a form of e-closing that is already beginning to be embraced by some in the industry. This technology makes the transfer of ownership almost seamless. Literally, it would take just a few clicks of a mouse. And this is also a massive benefit for the industry as the closing process would also change dramatically and become far more effortless and less time consuming than today’s standard means of closing on a home purchase. 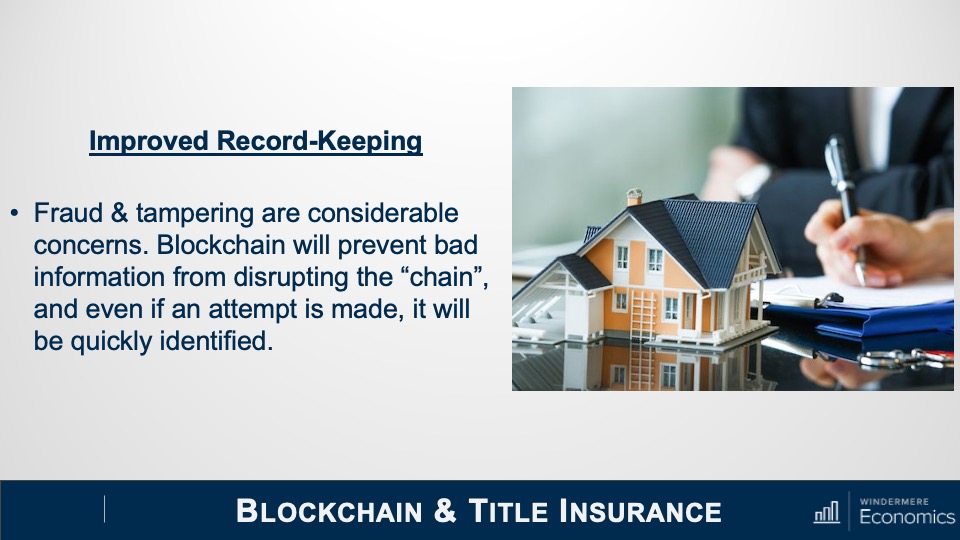 And finally, record-keeping. While fraud and tampering are huge concerns for title companies, blockchain could all but eliminate these instances within ownership records. And, as it would convert land records to a distributed ledger, it cannot be altered within the blockchain itself, therefore making it safe in perpetuity. Blockchain, by design, prevents bad information from disrupting the chain and any attempt to tamper with it can be easily detected and therefore avoided. This is a massive upgrade from the county ledger that title insurance companies find themselves working with today.

No one can deny that Blockchain and cryptocurrencies, while still relatively new, do not appear to be just a flash in the pan. As we have discussed today, a number of companies continue to make inroads into the real estate world. Will some fail? Of course. But others will succeed. So, while still in its infancy, we should all have some sort of understanding of its potential to be a disruptor in the housing space in the future.

It’s my own personal belief that the Blockchain tech itself will be the thing that gets adopted by the real estate world faster than the rise of crypto as a way to buy or finance a home but, whatever your thoughts on this topic are, I think that it is highly unlikely that we will see it simply fade away over time.

As always, if you have any questions or comments about this particular topic, please do reach out to me but, in the meantime, stay safe out there and I look forward to visiting with you all again next month. Bye now.

Where Will You Go If You Sell? You Have Options.

Why It Makes Sense To Move Before Spring

3 Best Practices for Selling Your House This Year

What to do around Seattle this week: New Year’s at the Needle and more

London's Farzi Café is Opening a New Location in Bellevue

Do You Believe Homeownership Is Out of Reach? Maybe It Doesn’t Have To Be.

Kirkland No. 3 in Money's Best Places to Live Ranking

Things to Do in Kirkland, WA

How To Prep Your House for Sale This Fall

Why Buying a Home May Make More Sense Than Renting [INFOGRAPHIC]

The True Strength of Homeowners Today

Want To Buy a Home? Now May Be the Time.

Why You May Want To Start Your Home Search Today

Where to Live in Seattle

Are There More Homes Coming to the Market?

How to Paint Your Bathroom for Lasting Appeal

Landscaping Tips That Can Increase Your Home’s Value

Choosing the Right Fence and Gate for Your Home

On the Fence of Whether or Not To Move This Spring? Consider This.

What to Consider When Buying a Second Home

A Quick Guide to Urban Farming